If you’re a big fan of platforming games, then you will definitely have heard of the “N” franchise, a game series that revolutionized platform gaming. N++ is the third and final instalment to the award-winning series, and is definitely the hardest. So, is it worth your money? Read on and find out!

You start off, as many platform games do, with a level selection screen. What’s new in N++ is that instead of having one big expanse of levels, you have 3 different sections: Intro, N++, and Legacy. Each of the sections consists of several different chapters, with each one containing 5 different levels. Each episode’s levels range in difficulty, going from easiest to hardest, making each chapter unique.

But what makes N++ different to its predecessors? Well, the biggest difference, apart from the lovely new design, is really is the huge amount of levels that come with it, as it features 2360 levels. Yeah. And that’s without factoring in the online levels, of which there are thousands!

What’s more, Metanet have made sure that not all its levels are the same things over and over again, as they consistently find different ways to have you play, be that introducing a new enemy, or even just with the layout of the level.

As well as that, each level has a name, most of which are funny! For example, one of our personal favourite levels, “Intro to accepting your limitations?”, is a room filled with gold. Not too hard, right? However, as you try and collect all this gold, you realise that the ones placed in the middle of the ceiling require some precisely timed jumps to acquire.

Gameplay. The most important part of every game, and pretty much determines how good it really is. So how good is N++’s gameplay? We think, pretty good.

Of course, there’s only so much you can do to make a platform game’s controls the best they can be, because, let’s be honest, they’re mostly the same every time. N++’s controls are pretty standard: left, right, and jump. No sprinting, no crouching, and no special powers, which is what makes it such a tough game. It all depends upon the skill of the player. And the durability of your controller.

N++ comes with 3 different game-modes: Solo, Co-op, and Race, with each section containing tons of levels to play. So, what do you do in each of these game-modes? Good question! Here’s an even better answer.

“Solo” is the game-mode for most platform games, where, you guessed it, you play by yourself!

“Co-op” is also pretty self-explanatory. You play with up to four of your friends in local multiplayer! Of course, if you have any…

“Race” is the game-mode very similar to co-op, except instead of working with your friends, you’re racing against them! 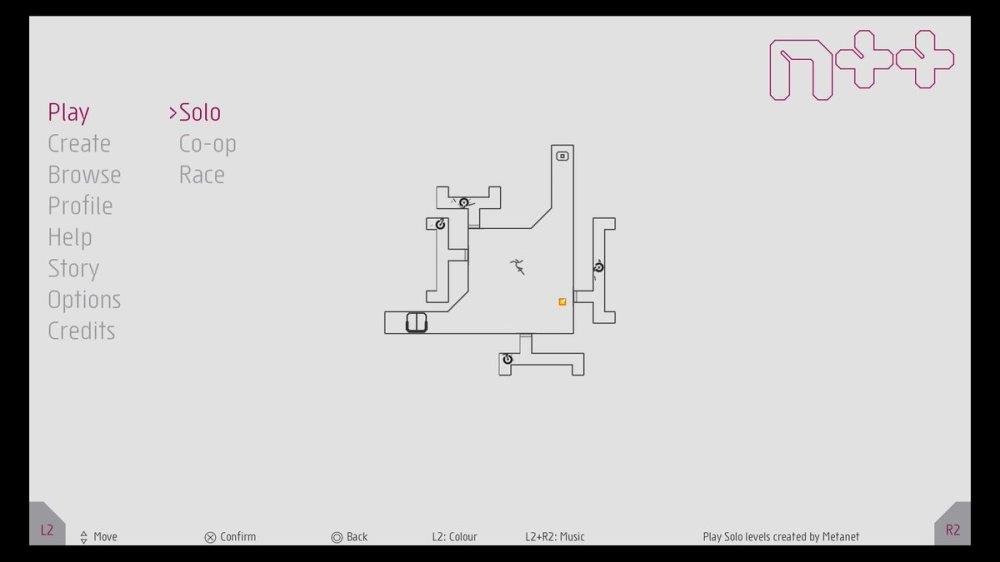 Of course, there are a few little tricks you can do. For example, more experienced players will be using what’s known as “corner jumping” to enhance their gameplay, and even skip parts of levels with it! If you hadn’t already figured it out, corner jumping is where you jump off the corner of a block. You didn’t really need an explanation. It’s not too hard to do, and only requires a little bit of practice, but it can make beating levels a lot easier, and is incredibly useful whilst speed running.

Another little technique is slope jumping. Yeah, we just made that name up then and there, but it pretty much describes what you’re doing! Sometimes, levels will have a slope in them, which the player will use to launch themselves off and over some kind of death inducing obstacle. By running and jumping up that slope, you’ll gain an incredible amount of speed, and you will fly across the gap!

Our main criticism with the gameplay is the restarting aspect of it. For example, if you’re halfway through an episode, and then quit, reloading it doesn’t place you back into the level you left from. Nope, you’ve got to replay the entire episode again, which becomes incredibly frustrating when you’re playing some of the much harder episodes, such as those in the legacy section.

What’s more, another criticism we have is the progression aspect. Currently, in both versions of N++, you have to beat an episode level by level. This can really slow down your gameplay, especially with the really tough levels, as it can take you ages to complete. Of course, you can always move onto the next chapter and play in that section. Maybe it’s just us, but it’s much more preferable to beat the levels in a linear fashion!

Interesting levels and fluid gameplay is all well and good, but how does it look? In N++’s case, pretty damn great! Metanet chose to use vector shapes and a flat UI to create a clean, sharp environment for their little stick figure to leap around in, and with over 8000 colours and 50 colour combinations, the levels look even more fantastic.

But it’s not just the flat shapes that look awesome: it’s the animations too. The fantastically fluid effects look lovely set against the minimalistic design, and it really shows you how much time and effort the devs put into making this game perfect.

We absolutely love the colours and art of N++, and honestly have no criticisms. They’re brilliant.

Ok, we’ve got some neat graphics, well designed levels, and smooth gameplay, but what about the music? Does N++ lay down some sick beats to run and jump to? The short answer: Yes. Definitely. Absolutely! Featuring just over 40 artists, N++ has a great soundtrack to run, jump, and explode to, and will have your blood pumping as fast as your stick figure is moving!

Of course, there’s always room for improvement, and for N++’s soundtrack, one of the things we’d like to see improved upon is just the overall feel of many of the songs. We have no problems with how they sound, not at all, just that when you’re sprinting through obstacles, you don’t want slow music to go along with it. Although the songs do pick up their pace, it would be great to see some more super-fast music with it, such as some of F-777’s tracks.

Apart from that, we’re fans of the soundtrack, and would love to see a digital/hard copy of it!

Beaten all of Metanet’s pre made levels? Well, pop over to the online levels section, and browse some of those! There are some incredibly tough levels on there, so you’ll definitely be provided with a challenge!

But how did people make those? Why, the level editor of course! The level editor in N++ takes a little while to get used to, especially on console, since so many buttons do different things! However, once you master it, you’ll be creating and sharing awesome levels in no time.

Unfortunately however, the level editor does have a few flaws. For example, the biggest, most annoying flaw, is the fact that you don’t need to verify levels before they’re uploaded. So, essentially, you could upload an impossible level. This can be pretty annoying, as we don’t want the online levels to be filled with a load of unbeatable ones.

In conclusion, we are huge fans of this game, and the franchise as a whole. We love the graphics, the music, and the gameplay in general, and would strongly recommend N++ to anyone looking for a challenging solo platformer, or some friendship testing local multi-player!

Want to check out the game yourself? No problem! Go here to buy it on steam, or go here to buy it on PS4. Oh, and if you’re interested in some more of N++’s art style, just visit their Tumblr, here! It’s filled to the brim with development graphics, early design ideas, and some awesome gifs!