Do you love pixels? Do you love patience? DO YOU LOVE ANIMALS? If the answer to all those questions is “Yah bro” then this is the perfect game for you! But what’s it about? How do you play? When will there be an update? The answers to all (most) of these questions are in this review!

Disco Zoo’s an awesome game, but what’s the best part about it? Well personally, I think the coolest thing about it is the art style. If you’ve read my previous posts, you’ll know that I’m a pretty big fan of anything pixelated! That’s why this game caught my eye. The art’s awesome, and all the little animals look amazing! 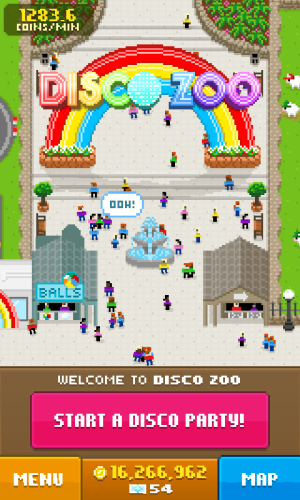 Another awesome thing about Disco Zoo is the hidden minigame “Funky Bus”. It’s basically just a harder version of Flappy Bird, but with a bus. On a motorway. With lots of animals inside. Not interested in secret minigames? Ok then! Why don’t you check out the huge selection of hats you can buy for your animals! There’s no better way to show your affection for your pixelated pets than to buy beautiful hats with your hard earned money!

But how do you rescue animals? Well, after you’ve set off in your vehicle of choice you’ll be confronted with a 5×5 grid and some tiny pictures of pixelated animals at the top. What you’ve got to do is tap those 25 tiles until you find an animal! Once you’ve found one, you’ve got to work out it’s pattern. Once you’ve completed the pattern, the animal will be added to your zoo!

Unfortunately, not everything about Disco Zoo is perfect. For example, to get the most out of it you’ll need to have a lot of patience. The game starts very slowly, and it takes ages to build up enough money to keep rescuing animals. Because of that, the game only appeals to a certain kind of audience: people with a lot of time on their hands. Of course, the more animals you collect, the more money you’ll make, but it can take a very long time.

Another pesky thing about Disco Zoo is the cloud sync. Yes, it’s extremely useful, especially if you’ve got 1768 animals animals and are earning 1283.6 coins per minute (me). Unfortunately, what the cloud save service does not provide is sync across different platforms. That means that what you do on Disco Zoo on an Apple device isn’t transferrable to an Android.
This is pretty annoying, since you may have made a ton of progress that you can’t sync to your lovely new Android phone!

All in all, Disco Zoo is an awesome game, with awesome art, made by awesome people. It’s one of my favourite games, and probably the only app I open daily! Of course, it’s not for everyone. I’d recommend this game to anyone with a lot of patience and a willingness to sit around and tap  a screen for a day or so. So, although it starts quite slowly, Disco Zoo does have great pixel art, and the gameplay picks up after you’ve collected a couple o’ dozen animals!

You can find the awesome artist who made it here!