Graphics are extremely important to games. They’re the first thing you see, and can often shape your entire opinion of what you’re about to play. So what are the graphics like on these two games? Time to find out!

In both Minecraft and Terraria, the graphics are pretty similar. Pixelated. However, when playing Minecraft, it feels like I’m playing in higher definition. Everything looks pretty awesome, and with mods such as shaders, a boring empty desert can become an oasis of sandy delight! As well as that, the pixels look sharper, which makes the game feel modern and unique. Minecraft suddenly becomes much more enjoyable! In Terraria, this isn’t the case. Like Minecraft, it’s pixelated, but the fact that it’s 2D makes the game feel like it’s jumped out from the past. I mean, I’m a huge fan of pixel graphics, and if a blast from the past is what Re-Logic was going for, then great! Awesome! But if they were going for a modern vibe like Minecraft, I don’t think they’ve quite achieved that.

Another issue I have with Terraria’s graphics is in the PS Vita version when you pick something up in your inventory. Whilst dragging it across the screen, the item is shown bigger, so you can see it from behind your finger. The re-sized item is shown in HD quality, and I have absolutely no complaints there! I love HD, it’s the best. The thing I have a problem with is when you drag stacks of items across the screen. The block is shown in larger, HD quality, but the number immediately goes blurry. Up close, that font is ugly. And making it blurrier definitely doesn’t do it any favours. 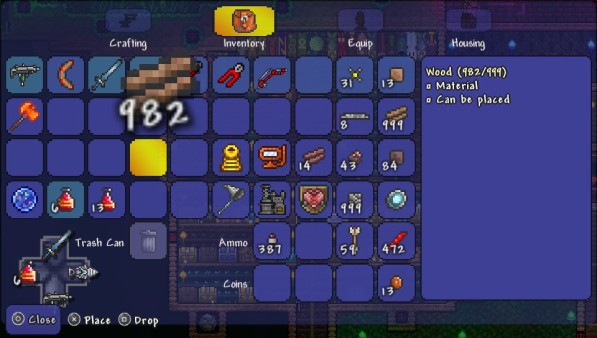 One of the only complaints I have about Minecraft graphics comes in the form of item art. As you almost definitely know, every item in Minecraft is represented by it’s little pixel art sprite thing. That’s great and all, but aside from all the block art, I just don’t think they made all the effort they could’ve, especially for items. All the art for the items and blocks whilst in the inventory look pretty basic, and I doubt it’s that hard to re-create! Obviously Mojang spent ages on their game, and the programming is great, but if you’re going to put so much effort into the code behind it, why not put just as much effort into the art?

But where Minecraft falls, Terraria rises up, like a phoenix from the pixelated ashes! There are 3646 different items in Terraria, and one poor design team had to make a tiny graphic for each one. Each item is incredibly detailed, and looks amazing both in and out of the inventory.

Unfortunately for Terraria however, it looks like Minecraft has won in this category. Their graphics are superior, and no matter how hard Re-Logic tries, they’ll never be able to make 2D graphics more impressive than the 3D art of Minecraft.

If you missed the previous Terraria VS Minecraft, where we discuss and compare the gameplay in each game, you can find that article here!

You can find the awesome artist who made it here!