I recently downloaded Portal Stories: Mel, and I love it. I may of only played a teeny-weeny bit of it so far but it is still really good!

Portal Stories: Mel is a fan made game based in the Portal world. It is set before the two original Portal games, and tells the story of Mel, and how she tries to escape the old Aperture Science with the help of a mysterious unknown speaker.

Early on in the game you acquire a prototype portal gun, partly made of paper clips, so you know its reliable 🙂 This game may be a fan made mod, but that doesn’t mean it’s bad. I think that personally, it is one of the best mods for 2 of my favourite games ever made! 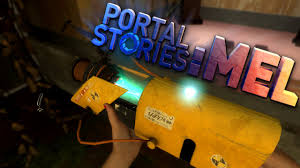